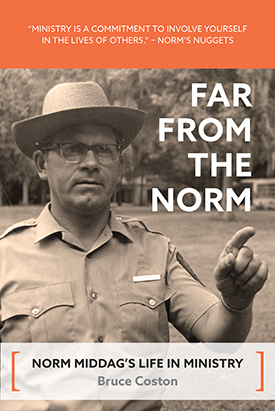 Far From The Norm

Norm and Barb Middag devoted over four decades to youth ministries across the North American Division. During that time thousands of campers and staff members were privileged to see wonderful examples of successful Christian living and selfless service. After retirement Norm and Barb remained committed to ministry as emeritus mentors to many youth ministers, advisors to Pathfinder Club leaders, consultants to camp directors, and contributors to numerous publications.

In January of 2017 scores of grateful people who had flourished as young people under the influence of Norm and Barb gathered at Camp Kulaqua to honor them. Though he experienced mobility challenges (mitigated in part by the golf cart in this picture), Norm retained his air of authority and keen wit as he presided over line calls in his unique way. Barb, ever by Norm’s side, was as gracious and fun-loving as always. Attendees laughed, cried, shared memories of how Norm and Barb impacted them, sang the meal prayer songs with gusto, participated in Camp Council plays, and toured the camp’s nature center which was renamed the Middag Nature Center in their honor.

Norm developed the Nature Center in the 1970s as the first state-certified camp zoo. He envisioned it as not only an animal exhibition site, but also a center for educational excellence connecting children and educators with the natural world and God who created it. All proceeds from this book will go to advance that goal.