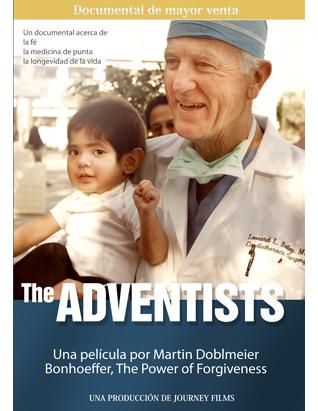 A baby in California is desperate for a heart transplant. A health care facility in Florida offers a model of the hospital of the future. A religion has its members living up to 10 years longer than most. It's all part of the story of an American-born faith—the Seventh-day Adventists.

The Adventists is a documentary film on the Seventh-day Adventists that explores the history and contemporary story of the faith-group whose members are some of the healthiest and longest-living people on the planet. The film aired on PBS stations and has been a best-selling DVD on Amazon. It won the prestigious Gabriel Award, a Telly Award and a Peer Award.

Formed on American soil in the mid-19th Century, Seventh-day Adventists are by their own description a conservative religion that holds as a central tenet that Jesus Christ is returning again, soon. At the same time Adventists are pioneers in medical technology and health care exploration. For them, waiting for the Second Coming is not a time for fear, but for preparation and hope.

Filmed on location at hospitals and health care facilities in Florida, Ohio and California, the film also contains a reenactment of The Great Disappointment and a profile of John Harvey Kellogg, whose Battle Creek Sanitarium set the standard for progressive health care in the early 20th century.

Selling copies of The Adventists is a great fundraiser for schools, Pathfinder Clubs, and youth groups. Buy a case of 30 and you pay only $9.95 for each DVD. Sell DVDs to family, friends, and church members for $20 and make a $300 profit! Every Adventist home should have a copy.