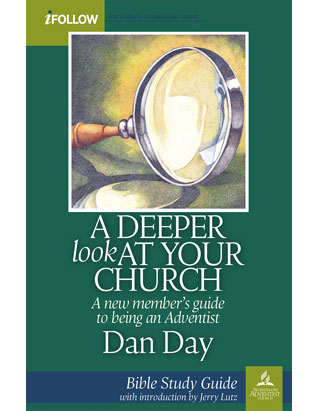 A Deeper Look at Your Church - Bible Study Guide

A Deeper Look at Your Church is a book every new Adventist should read (along with those who are not so new, but could use a refresher). It is really “the rest of the story” from what you heard during evangelism—stated in terms of discipleship.

A Deeper Look at Your Church doesn’t revisit the distinctive doctrines of the church or address the 28 Fundamental Beliefs. What it does, though, is help the new Adventist “lift the hood and look inside,” getting a better idea of what it really means to be an Adventist. It deals, specifically, with the driving values of Adventism, including the historical forces that have shaped the church. More than that, it discusses the core commitments that have caused Adventists to do what they do in the community, reach out to a world in mission, set up vast healthcare and educational systems, and establish a community of over 17 million members worldwide, committed to being Jesus’ disciples, awaiting His return.

Dan Day is an experienced pastor who is currently serving as the Director of Special Projects for the North American Division at the Adventist World Headquarters in Silver Spring, MD. For seven years he served as Director of the Church Resource Center, and he was the Executive Editor in the development of the iFollow discipleship resource. Day served for many years as an Adventist college vice president. He also served as a vice president for marketing and advertising in various corporations and owned his own marketing and consulting firm.

Paperback. Part of the iFollow series.